If you are going to fulfil your life’s purpose, you have a part to play. You have a vital role to play in the outcome of your life because life is not ‘que sera sera’ – whatever will be, will be.

If you are poor or sick today, there is more to it that is hidden underneath. What is important is what you do in your poverty or sickness to affect your future.

Until you see life that way, you will continue to try to get things done in your own power. If God does not help you in His own time, then nobody will be able to help you. Only God can provide a lasting solution to any problem.

If you would only seek God and pray about that issue, then a change will come.

Jabez was born in sorrow. He was named sorrow because the mother gave birth to him under sorrowful circumstances. There was nothing the mother could do for him because he had caused sorrow.

Everybody in school would call him sorrow. But Jabez determined, “I don’t want to cause sorrow anymore.”

The Bible records that he prayed in 1 Chronicles 4:9-10,
“And Jabez was more honourable than his brethren: and his mother called his name Jabez, saying, because I bare him with sorrow. And Jabez called on the God of Israel, saying, Oh that thou wouldest bless me indeed, and enlarge my coast, and that thine hand might be with me, and that thou wouldest keep me from evil, that it may not grieve me! And God granted him that which he requested.”

Don’t be quick to accept any mishap as your lot in life. The book of James 5:13 recommends prayer. “Is any afflicted among you, let him pray.”

Jabez did not only change his name, but he changed himself and prayed. You can still do something about it. Don’t give up! 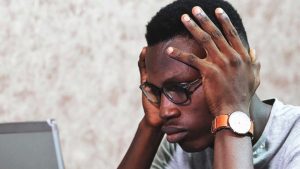